Another one from Play’n Go gaming developers, Gumball 3000 slot is all power, noise and bonuses, as it takes players to a day at the track with fast cars and loud engines. From the get go this slot is colourful and loaded with video sequences, with backdrops and symbols that suggest an upcoming race featuring a few high-end cars. This is a 5 reel, 15 pay line slot game and features a extensive range of betting options to the extent that players can find tune their bets to number of coins per line, size of coin denomination as well as number of lines even available.

There is a lot of engine noises and revving sounds to be heard throughout in the background and the symbols on the reels even display a few high end cars that must be involved in the race. The bonuses attached to this Play’n Go slot game are fairly standard, with a free spins feature triggered through the Wild symbols and a Scatter bonus game that doles out an instant prize. These serve to add an extra bit of excitement to the reels.

Gumball 3000 is definitely a racing themed slot, though the name seems inclined toward bad comedies from the late 70s. As evident from the backdrop this slot seems practically set within a race, as players can observe the cars behind the reels all lined up at the starting blocks. The sound effects too help the players feel right on the track with car revving sounds and other such engine noises. These of course get more excited and loud the more wins are hit.

As far as the symbols on the reels go there is nothing too overwhelming here, with some of the symbols adopting the theme of cars whilst the others are made up of playing card symbols. On the reels players will find that the cars top the pay out table, with the blue sports car leading the pack with a jackpot of 2500 coins. Then comes the green, red and yellow cars followed by the playing card symbols that make up the lower game wins of Gumball 3000. 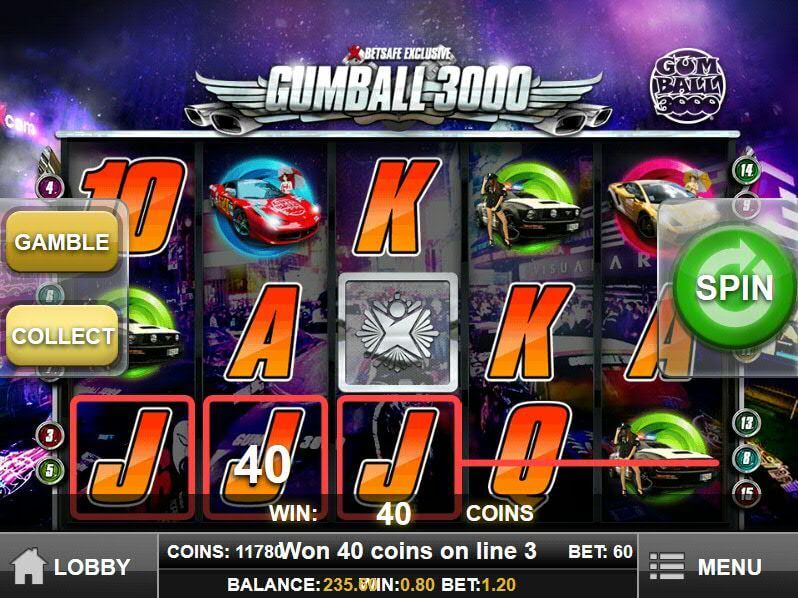 As mentioned briefly above, this slot incorporates quite an extensive betting selection, with the 15 pay lines adjustable from the outset. Players can change the number of coins bet per line as well as this coin size, which enables a fairly extensive and thorough selection of possible bets per spin. There is of course an auto spin feature included that enables a bit of automated spinning to take place and ergo relieve the player’s requirement for constant interaction.

Bonuses at the End of the Race

Most good and popular online slots of today have included some form partnerships f bonus feature at the minimum as these prizes and rewards help to elongate a players spinning as well as reward them with additional wins and excitement. These include a Wild symbol and a bonus symbol. The Wilds only appear on reels 1 and 5, and if players land Wilds in all possible positions on these 2 reels then the free spins feature is triggered and 15 free spins awarded.

The Scatter bonus triggers the instant prize bonus game where players must simply select a destination for the end of the upcoming race. This feature incorporates a lot of video and visuals making for an interesting change in events as well as an instant bonus reward.